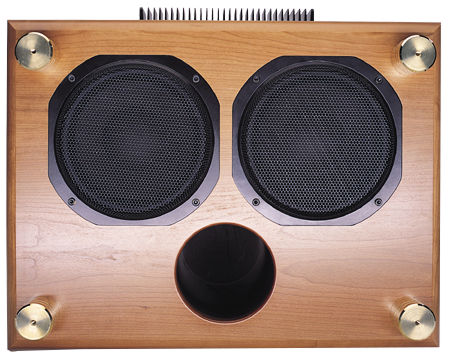 Makers of powered subwoofers fall into two camps: those that fit a high-powered amplifier and a single, large woofer into a relatively small, unobtrusive enclosure; and those that build two or more 10" woofers and an amp of moderate power into a larger, heavier enclosure.

REL Acoustics Ltd. is of the latter persuasion. Led by Richard Lord, the Welsh firm has dedicated its considerable engineering talents and facilities to creating dedicated bass loudspeakers. Beginning with Lord's Stadium series in 1992, REL has produced cost-no-object subwoofers designed to reproduce both bass and what Lord calls "sub-bass"—the lowest musical fundamentals of percussion instruments and pipe organs, as well as nonmusical acoustic cues as to the size and shape of the recording venue. REL's focus on sub-bass has resulted in subwoofers that deliver a signal well below the output of most full-range speakers, preventing reinforcement of room modes or upper-bass prominences in the satellite speaker that can lead to "one-note" bass output.

Determined to experience sub-bass in my listening room, I arranged with REL's US importer, Sumiko Audio, to audition their largest subwoofer, the Studio III. It wasn't only that desire that led me to select this "supercar" of subs, but Sumiko's assertion that I needed this $9000 beast to generate sub-bass in my large listening room (footnote 1).

The Studio III is 27" tall by 24" wide by 22" deep, and, at 205 lbs, heavier than any other subwoofer I've auditioned. Its massive, rectangular enclosure is finished in a cherry veneer, with a top-panel inlay of tempered glass laid over black felt. The rigid cabinet is multiply braced and made of 30mm-thick MDF. Two downward-firing 10" woofers, sourced from UK manufacturer Volt, are loaded with what REL calls a "Super Acoustic Resistive Matrix" (ARM), a folded transmission line ending in a downward-firing port, that provides bass response down to 9Hz. The enclosure is raised from the floor by four brass feet.

The Studio III has one input channel. While the subwoofer can be driven by line-level signals, either via one of a pair of RCA jacks with different sensitivities, labeled "0dB" and "+12dB," or via a balanced XLR jack, the setup instructions strongly recommend that the owner feed the Studio III from the output terminals of the power amplifier that drives the main speakers. This is via gas-tight Neutrik Speakon connectors, one unbalanced for use with conventional amplifiers, the other balanced for use with amplifiers having a bridged output stage. The high input impedance (100k ohms) of the Studio III's input prevents it from loading the amplifier.

Why use the amplifier output as a source? First, REL believes that the subwoofer should get its signal from the exact source driving the main speakers, for best integration with the audio system. Second, the Studio III's sub-bass range eliminates the need for a high-pass filter to roll off the main speakers.

The Studio III's controls were not intuitively clear at first glance; reading the three pages of instructions definitely helped. On the left is a column of three rotary controls. The top one, High Level, controls the volume of the signal entering either of the Speakon connectors from the main amplifier terminals. The middle knob controls the volume of the line-level inputs from the two RCA jacks. The bottom knob, Mode, controls phase and the option of switching the Studio III between standard sub-bass operation and using both sub-bass and wider-range subwoofer operation, depending on the processor and the source material. (In Mode 2, for example, the main speakers are set to Full-Range and drive the Studio III's high-level input, while the surround processor's line-level LFE signal is taken to the low-level input. This allows the REL both to extend the main speakers' bass response and handle a film soundtrack's sub-bass sound effects.)

Do not attempt to set up the Studio III alone—it's far heavier than it looks. Two Sumiko installers, Patrick Butler and Allan Hager, traveled to my listening room to install the big REL. They had all the desired criteria: youth, intelligence, physical strength, and lengthy experience with and respect for REL subwoofers. Together, they lifted the Studio III off my garage floor, carried it carefully into my house, up the stairs, and into my listening room. Patrick—taller, more fastidiously dressed, more precise in diction—orchestrated the physical installation. Allan—more casually dressed, more poetic—provided a lengthy description of how to accomplish the subwoofer's fine-tuning and room-matching.

The second reason that installing a REL Studio III is no solo task is the degree to which the sub must be tuned to one's listening room. A minimum of two people are needed: one to listen, the other to set the controls on the Studio III's service panel. This Patrick and Allan did. In fact, Sumiko trains dealers across the US to install and tune REL subwoofers; any buyer of a new Studio III would get the same assistance in delivery and setup that I did.

The Studio III was initially positioned in the corner behind my right-channel Quad ESL-989 loudspeaker. The Quads were left sitting 5' from the front wall, 8' apart, 3' 9" from the side walls, and slightly toed-in. My listening chair was 10' away. The Quads were near one short wall of my lightly damped, rectangular listening room (26' long by 13' wide by 12' high). Behind the listening chair, the other end of the room opens into a 25' by 15' kitchen. 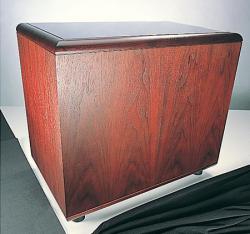 Blessedly for my listening-room floor, the instructions recommend against using the supplied spikes. REL claims that the Studio III works best if the drivers and port are close to the floor, where they can produce a high-pressure zone. The Studio III sat on its brass feet.

For the next step, Patrick Butler took the Studio III's twinned 10m pair of input cables and pulled them apart so that one of each of the two leads could go to the Mark Levinson ML-2 monoblock sitting behind each Quad. He stripped the insulation off the bare ends and connected them to the same terminals used by the spade lugs in my PSC speaker cable: red output cable to red speaker terminal, black output cable to black speaker terminal. (For differential amplifiers such as the Krell FPB 600C, the black wire is attached to chassis ground, not to Krell's black speaker terminal.) The other end of the two long cables were terminated in a Speakon connector plugged into the Studio III's unbalanced input. [Taken literally, this would result in mono sound as each amplifier would be connected to both speakers. I imagine that there is a relatively high-value series resistor in each cable taken from the REL's high-level input to the two amplifiers to keep the channels isolated from one another upstream of the subwoofer.—Ed.]

Phase optimization was next. Playing the Sneakers soundtrack (CD, Columbia CK 53146), Allan Hager set the low-pass filter at 40Hz so there would be definite overlap between the Quads and the subwoofer, and the system volume to High. When he switched the phase control on the Mode switch, I could easily hear that the 0 degrees position was louder than the 180 degrees setting.